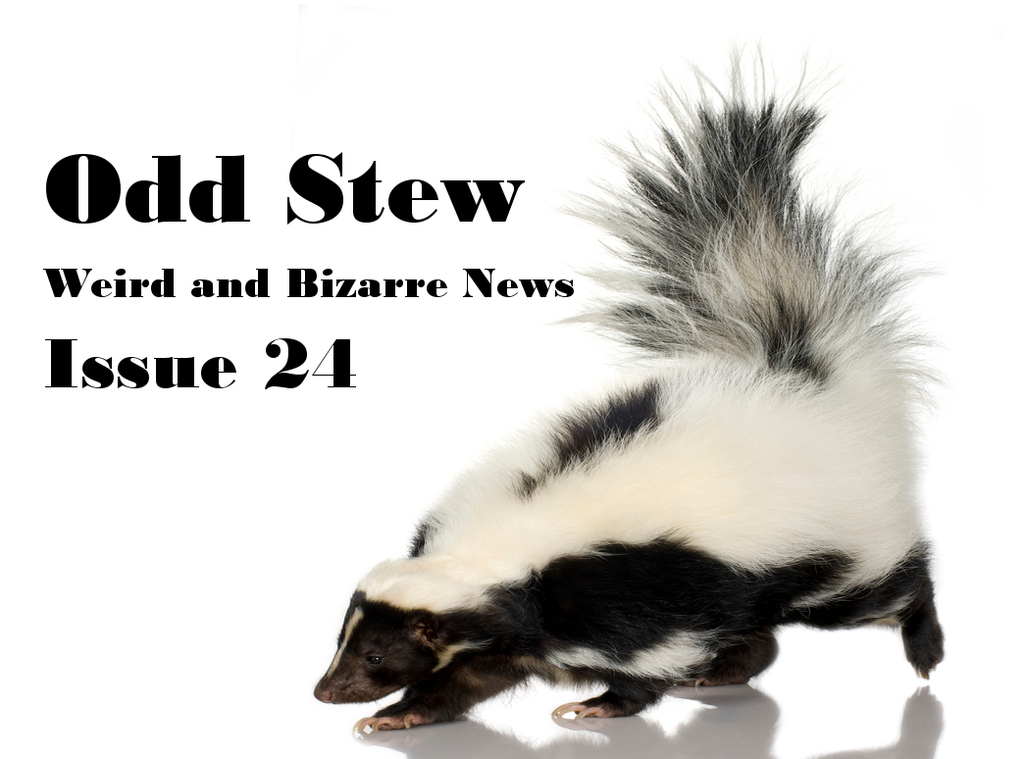 Issue 24 of the Odd Stew: strange and weird news items, oddities, plus other fascinating things that have happened in the news that you may have missed.

A Romanian University set out on a landmark study in 2017. Their experiment answered a question that has crossed many people’s minds during the winter months. When is it okay to eat snow?

What was their conclusion? It was safe to eat snow that was a half-day old, but when it got to two days old, it was no longer safe to eat. They also went on to say that snow eaten in the colder months was safer than in the warmer months.

Researchers from Sapientia Hungarian University of Transylvania collected snow in Miercurea Ciuc, Romania, in the months of January and February in temperatures ranging from 30 to 0.7 degrees Fahrenheit (1.1 to 17.4 degrees Celsius). They took the snow samples and placed them in sterile containers and waited to see when bacteria and mold would grow on the samples. After the first day, five bacteria per millimeter were counted for the snow in January, and the bacteria quadrupled after the first day for snow picked up in February. The professor behind the study, Istvan Mathe, came up with the idea when he saw his own children eating snow.  (AP 2/8/2018)

Police were called to a gas station with a report of possible shoplifting in Peoria, Arizona, a suburb of Phoenix. When they arrived, a man and a woman ran off from the establishment. Police began a pursuit, and the suspects ran along the side of a building before scaling a fence. The problem for the suspects was that they had just scaled the fence to the parking lot to the police station. Neither had seen a large sign that read “Peoria Police”.

The woman hid under a bench inside the police compound and was found and arrested, while the man went back over the fence and was arrested on the street. They were charged with shoplifting, drug charges, and trespassing in a critical safety building. (KTAR-FM 2/28/2018)

Fine Art on a Bus

A painting by Degas from 1877 titled “Les Choristes”, which depicted a scene from Mozart’s opera “Don Giovanni”, was found on a bus inside a suitcase in Paris, France, on February 16, 2018. The painting had been stolen from a museum in Marseille in 2009 while on loan from the Musee d’Orsay in Paris. Customs agents, who were doing a random search and not looking for the painting, were unable to find which passenger the suitcase belonged to because no one ended up claiming the suitcase, or the rare piece. The painting had previously been valued at more than $1 million. (Washington Post 2/24/2018)

Not the Best Way to Get Rid of a Skunk

A man in Ferndale, Michigan, just north of Detroit, decided he would get rid of skunks from a crawlspace in his rented home all by himself. He decided on using a smoke bomb to do the job, but things went terribly wrong and a fire broke out. By the time the fire department arrived, the crawlspace and the first floor of the home were in flames. It quickly spread to the walls and to the attic, eventually destroying the home as well as most of the man’s possessions.

As for the skunks the man was trying to get rid of? Firefighters reported that they found no skunk carcasses after the fire had been extinguished. (Detroit Free Press 2/20/18)

I Bet They Were Saying More Than Just “Bollocks”

Two men named Andy Sampson and Paul Adams were metal detecting on the border of Suffolk and Essex in England when they came across a treasure trove in a field where the farmer had given them permission to explore. They ended up finding 50 gold coins and pottery.  The pair were excited about their find, and good luck, believing it to be “Roman gold” worth up to £250,000. But the good fortune and excitement was short lived. When Mr. Sampson showed the coins to a neighbor, he believed there was something wrong with their find.

The two men began to investigate and found out that the farm they had been metal detecting in had been a filming location for a BBC comedy called the Detectorists, a show about two men and their hobby of, if you can believe it, metal detecting. The crew on the show had filmed a tractor plowing up the field, revealing coins as it went along. Unfortunately not all of the “coins” were brought up and some remained in the dirt. These were the ones Sampson and Adams had found. Both men said they would continue to metal detect despite their unlucky find. (BBC 1/31/2018)

An woman named Michelle Myers of Buckeye, Arizona, has a thick British accent. While that may not seem that odd, the thing is, Myers is not British, and she has never traveled to Europe or even been out of the United States. That still doesn’t sound that odd since she could have learned how to speak with a British accent, but Myers never learned. Her accent came on spontaneously.

Myers has experienced changes in her accent three times in the past seven years. She explained to The Arizona Republic that she went to bed with a severe migraine and woke up speaking with a different accent. The first time it happened she had an Irish accent that went on for a week. The next time it happened she had an Australian accent that lasted for a day. The third time she woke up she had a British accent that she compared to Mary Poppins. This accent has stuck with her for the last three years.

The Arizona woman wasn’t playing some sort of trick and was diagnosed with an actual medical disorder called Foreign Accent Syndrome, or FAS. The disorder is most often associated with a brain injury or stroke when the placement of the tongue is altered along with intonation and timing of speech. The motor disorder affects speech and only 100 cases have been documented since 1907. In addition to FAS, Myers also struggles with a genetic tissue disorder called Ehlers-Danlos syndrome which causes joint hypermobility, fragile skin, and skin hyperextensibility. Her accent is believed to be caused from her migraines. She doesn’t know if her original accent will ever return, but Myers hasn’t let it stop her and has become an advocate for others going through the same problem. (The Arizona Republic 2/16/18)