The Pont des Arts pedestrian bridge over the Seine river in Paris had been inundated with a pesky problem since 2008, and the city finally had to take action in 2015. 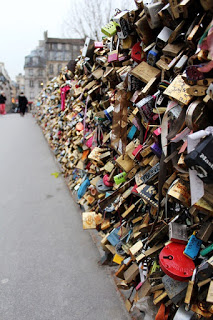 It was known as the “Love Locks” bridge, and had been damaged because of tourists attaching padlocks to the structure to profess their love.  The practice migrated from Italy after couples began attaching locks to the Ponte Milvio bridge in Rome.  Italian officials banned the locks which eventually damaged the ancient bridge.  The Pont des Arts bridge eventually had the same problem, and the city of Paris began removing all the padlocks from the railings and replacing them with plexiglass panels before the tourists damaged the bridge even more.

The practice by so many romance seekers involved the placing of a metal padlock onto the railing of the bridge that had a message of love or the couple’s initials inscribed on it.  The key to the lock was then tossed into the Seine below the bridge.  There’s an estimated 700,000 keys at the bottom of the river, and the railings weighed 1,100 pounds because of the weight of the locks.  One rail that collapsed in 2014 weighed around 1,500 pounds.  This amount of weight was on a bridge that was built in the 1800’s.  The overall estimate of the weight of the padlocks on the entire bridge was around 45 tons. A group of sculptures now reside in the middle of the bridge where the “Love Locks” once were.

It’s still not known what city officials did with the “locks of love”.  Most likely they been moved to recycling centers but some have been put into art pieces so they can continue to be publicly displayed.  But the problem seems to be spreading as other bridges along the Seine have begun to have locks show up on their railings.  Many citizens of Paris were glad to see the locks go, and there was even a website called nolovelocks.com that was started to combat the problem.  But Paris isn’t the only place dealing with the pesky locks.  The love locks have appeared in New York, Australia, Germany, Las Vegas, and Ireland, and brought with them their own set of problems.  What ever happened to just getting a nice card and some flowers?

The Flight That Stayed in the Air for Two Months

How Did the Jeep Get Its Name?