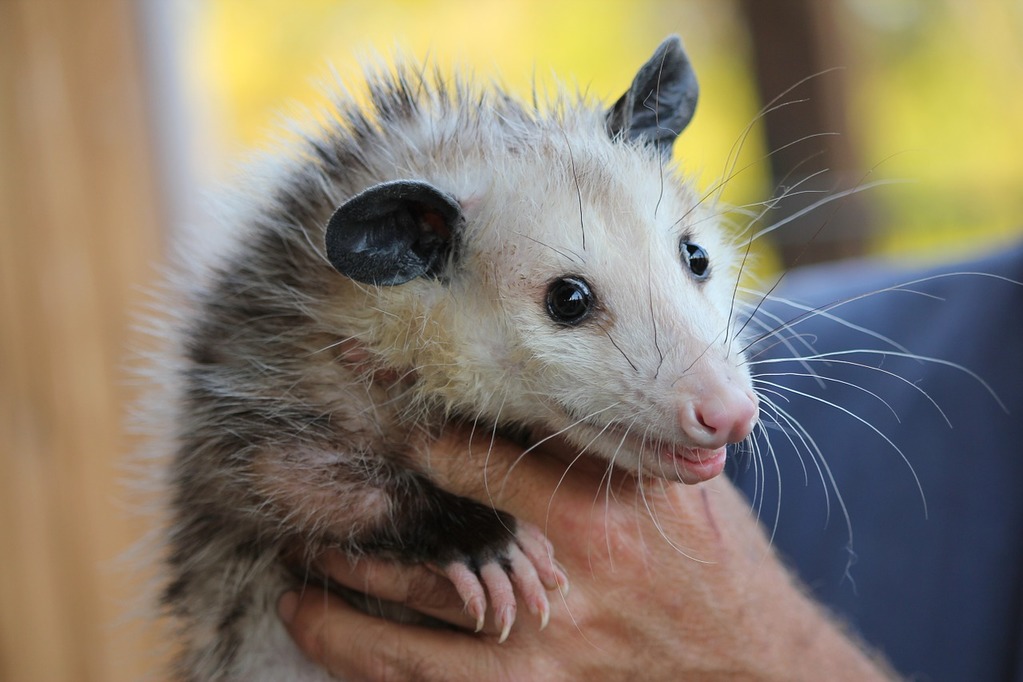 The opossum often gets maligned as being nothing but common vermin that resembles a large rat. While the image of the opossum doesn’t help its cause, it is a quite fascinating animal. Here are some amazing facts about this creature that might change you from a opossum hater to a opossum fan.

First off, it helps to know how the opossum was discovered. While the native people in the Americas knew of the animal, it wasn’t until Vincente Yanez Pinzon, who incidentally was the commander of Christopher Columbus’s ship the Nina, came upon an opossum with its young after landing on the coast of Brazil in the late 1400s. He took the animal back to Spain and presented it to Queen Isabella and King Ferdinand.

We  must then fast forward over a hundred years to get to the first description of the North American opossum that was written in English by Captain John Smith of the Jamestown colony. He named the animal opossum and got it from the Native American word “apasum”, which meant, “white animal”.

The different spellings of the word for the opossum relates to the way these mammals have been grouped. When Captain James Cook explored Australia on the ship, the Endeavour, in 1768, he had on board a naturalist named Sir Joseph Banks. Banks gave the name opossum to the Australian marsupials they found during their exploration. While these mammals were marsupials, they were actually in a different group. The “o” was eventually dropped because this family of marsupials had two phalanges, or toes, that were opposable to the other three phalanges on the front paws. This was known as “phalanger” and helped aid these marsupials in climbing trees. The word possum almost refers exclusively to animals in this region of the world.

Jack and Jill Went up a Hill

Opossums have fifty teeth, and when they’re startled they’ll show these teeth and growl to ward-off the threat. This is just a bluff on the opossums part, but it has given the animal the reputation they are aggressive and will attack if pushed. These animals also have salivary glands that produce a large amount of saliva that keeps the mouth clean and helps digestion. Because of this, opossums drool a lot, and it drips from their mouths. This is another thing that is natural to the opossum but gives it a more menacing appearance. 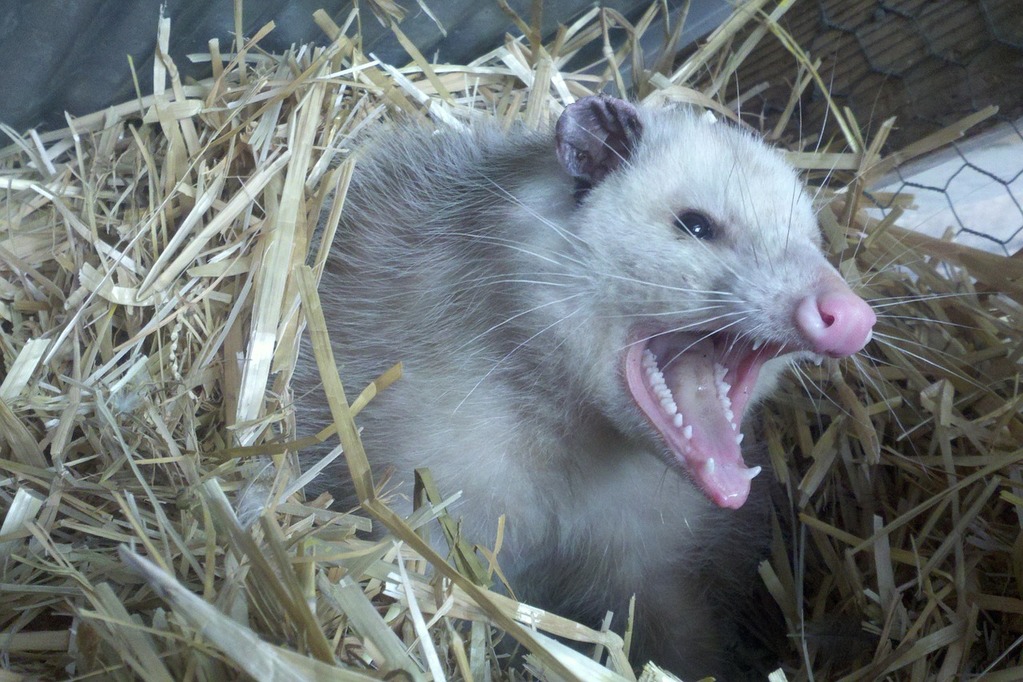 Opossums have a prehensile tail, which means it’s able to grasp, and it aids the animal in climbing and balance. They can hang by their tail to support their own weight, but only for a short period of time. Amazingly, opossums have been observed carrying leaves and other light things with their tails in order to move these to their dens, effectively using it as another appendage. The opossum also have impressive other appendages. The hind foot has opposable toes. Primates and opossums are the only mammals with this characteristic.

The opossum was generally limited in its range to the eastern part of the U.S. because of the deserts and mountain ranges to the west. The climate and terrain in this area was too harsh for the opossum to survive. That changed in 1890 when the Virginia opossum was introduced into southern California. They spread northward along the coast and then spread into central California in 1910 when immigrants from Tennessee brought them into the state. The opossum was a delicacy to the people from this region. It was only a matter of time before some of the opossums escaped and began to populate the area. The opossum was already being introduced in Oregon and Washington around the same time.

The opossum is only limited in its range due to cold or lack of water and are very adaptable animals. Opossums are actually quite smart compared to other animals in their ability to find food and remember where it is. They can even remember a noxious taste a year after they first tasted it. Opossums are even better than cats and rats in solving a maze. 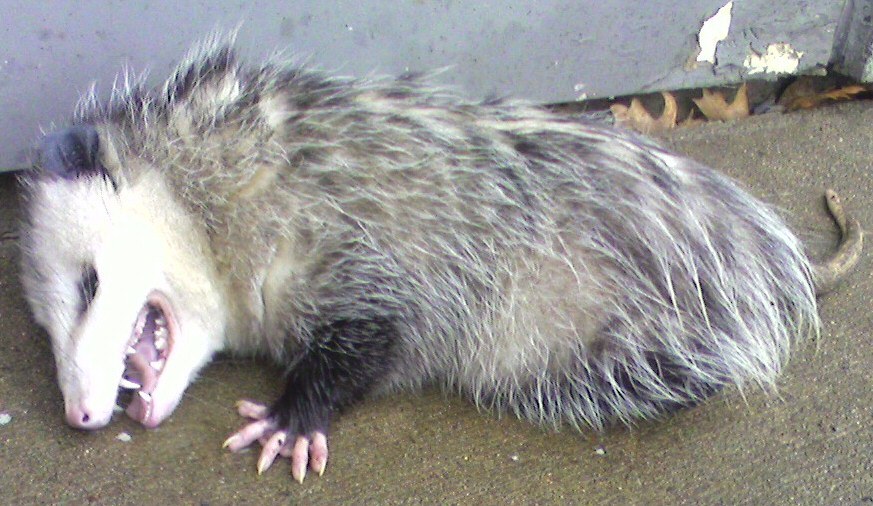 While opossums are great bluffers, they’re even better at playing dead, or “playing possum”, as it is known. When a opossum is caught in a situation it can’t get out of, it goes into a highly specialized defense maneuver. The opossum will lie on its side with its mouth still open (to bare the its many teeth and drool) and will secrete a foul smelling odor. The opossum will stay in this position for only a few minutes or up to several hours. Moving or poking the animal will not arouse it. ECGs of a opossum’s brain reveals that brain activity is no different than when the opossum is awake. This behavior has been considered similar to fainting in humans.

The possum has the ability to neutralize almost any poison, even from animals that it has never come in contact with from other continents. Scientists have managed to discover what makes the opossum so resistant to the venom of snake bites or poison. A small protein called lethal toxin neutralizing factor (LTNF) is in the opossum’s blood, and this proteinase inhibitor binds with and neutralizes venoms. Opossums also show an increased immunity to rabies and are not usually found to rabid. In addition, they also show a resistant to other viral diseases that are found in domestic animals. The belief is that this resistance occurs in some part to the animal’s lower body temperature as compared to other mammals.

Opossums have many myths attached to them that aren’t warranted for this rather fascinating animal. They don’t hang by their tails from trees to sleep (they do that in dens on the ground like other mammals). They aren’t aggressive and will not attack pets, and are, in fact, shy animals who want to avoid contact, and they don’t spread diseases like rats. So the next time you see an opossum, you’ll know that these are amazing animals who have merely suffered from a bad image problem.

The World’s Oldest Living Vertebrate
A Gecko Can Stick to Any Surface, Except One
A Fish That Only Lives in Death Valley
Hallucinogenic Honey That Comes From a Really Big Bee

How Do Seeds Know Which Way is Up?