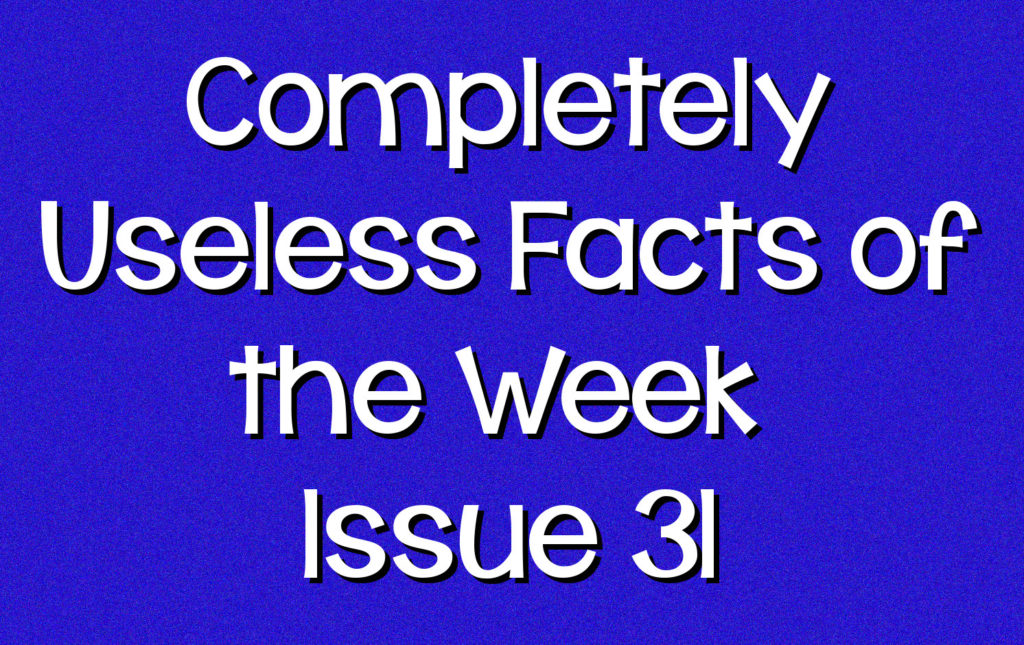 The weekly collection of useless and fun facts.  In this week’s edition: Peeing In Space, Buzz’s Mom, Not At the North Pole Cities, Cricket Thermometers, and Windows Sound Creation. We’ll start out with a great topic–peeing in space.  NASA had to relabel the penis sleeve for urinating in space suits from “small, medium, and large,” to “large, gigantic, and humungous” because astronauts would only choose the large and the sleeve would end up being too loose.  This particular sleeve for an astronaut’s private part was attached to the Maximum Absorbent Garment, or MAG, in the spacesuit.  It was basically a large, absorbent diaper.

While the designations, “large, gigantic, and humongous,” are probably not “official” NASA designations, these terms were more likely an inside joke between astronauts and the waste-management scientists.  But the problem of picking a smaller size or even one that was too large was real.  If an astronaut had a size too small, the urine wouldn’t flow and would back up, and if it was too large, the astronaut could find themselves in a real predicament because the urine would leak and flow into the garment.  Not the most ideal situation while floating around in space.  As human nature as it is, especially with astronauts, it’s no doubt that they wanted to be thought of as being “well-endowed” while also not pee-peeing on themselves in the process.  Source, Source Continuing with things space related but not specifically dealing with bodily functions, Buzz Aldrin’s mother’s maiden name was Moon. Yes, that’s it.  Buzz Aldrin was the second person to walk on the moon after Neil Armstrong and his mom’s name was Marion Moon.  In an interview with the New York Times, Aldrin says that he never told NASA about his mother’s maiden name.  He didn’t want someone to think he had received special treatment because his ancestors had the name Moon.  On a sidenote that has nothing to do with this fact, Aldrin also recorded a rap session with rapper Snoop Dogg in 2009, just in case you were interested.  Source

There are 3 cities in the United States with the name North Pole. They are in Alaska, Idaho, and New York.  The one most closely located to the geographical North Pole is North Pole, Alaska.  In 1949, the area’s name was changed from Davis to North Pole after a request was granted from a U.S. District Court judge.  The landowners thought that a toy business might make a factory there so they could say their toys were made in North Pole.  While the “Made in North Pole” label never came to fruition, the theme has continued to grow.  Many streets have holiday names; such as Santa Claus Lane, Holiday Road, Kris Kringle, Mistletoe, and Snowman Lane.  Many of the buildings have Christmas colors, and the street lights are decorated like candy canes.  If you’re not a fan of the holiday, this might not be the place for you.

But that’s not the only North Pole to experience.  North Pole, New York is a hamlet located in the town of Wilmington in northern New York state, and it has an interesting claim to fame.  It is home to one of America’s first theme parks, Santa’s Workshop, as the park was designed to look like Santa’s village.  It opened in 1949 and was given its own zip code in 1953.

These aren’t the only holiday themed towns in America.  There’s a Santa Claus, Indiana, where in 1856 the town decided to change the name but couldn’t think of anything better than Santa Claus.  There’s also a Christmas, Florida, Bethlehem, Pennsylvania, and Snowflake, Arizona, which wasn’t named because of the weather, but because the last names of the town’s founders were Erastus Snow and William Jordon Flake.  Source, Source, Source

Try this out on your next camp out, or while you’re sitting in the backyard being bored.  If you count the number of chirps of the North American cricket in 14 seconds, and then add 40, you have the temperature in Fahrenheit degrees.  This is the formula from the Old Farmer’s Almanac and has been proven to be true.

The male cricket is the chirper and does so by rubbing a sharp area of one wing against a set of wrinkles on the other wing.  How far apart the wrinkles are determines the tone of the chirp.  Crickets chirp for a variety of reasons.  They chirp to find and attract a mate, to alert that there is danger, and chirp when showing aggression toward another male cricket.  The formula above only works when the crickets are chirping of course.  So when the temperature drops below about 55 degrees Fahrenheit, crickets are no longer very active so there will be no chirps to be heard.  Better consult that thing called a thermometer at those temperatures.  Source, Source

The “Microsoft sound” was created by acclaimed musician and producer Brian Eno. He made it on a Mac.  Interestingly, Eno, who was an innovator in ambient music (think synthesizer heavy elevator style music with lilt), had never used a PC.  He just didn’t like them.

The sound he was commissioned to create was dubbed the, “Microsoft sound”, and it was the sound for the PC operating system, Windows 95, during boot up.  It had to be 3.25 seconds long and needed to be something that was universal, plus a whole host of other adjectives required by Microsoft.  Eno made 84 pieces of music before coming up with the iconic sound, and it is reported that he received $35,000 for it, even though it was still written on a Mac.  Source

We’re all done here for this week. Check back again for another new edition next week and remember to annoy those around you with your new found knowledge.