The weekly collection of random and fun facts.  In this week’s edition: A Stolen Highway Sign, The Long Guinness Brewery Lease, Gilligan’s Island in the City, A Lifeboat Mystery, and The Boat of Elvis. In 2014, the State of Colorado switched mile marker “420” to “419.99” on Interstate 70 east of Denver because people had been stealing the sign too often.  The Colorado Department of Transportation said the sign had been altered sometime during the last year.  Why the rash of thefts on the sign?  It’s believed to be because the number 420 is associated with smoking cannabis, also known as marijuana, weed, ganja, reefer, or hashish at the time of 4:20 PM, and it’s also a day of cannabis celebration on April 20th.  The origins of the number are not accurately known, but it was obvious to the transportation department why the sign was continually stolen.  The 419.99 sign was actually placed 50 feet from the spot the old sign stood, so its location is still accurate.  Source Talk about a good deal.  A really good deal.  The Guinness Brewery at St. James Gate in Dublin, Ireland once had a 9,000-year lease on the property of an unused brewery and paid only 45 Irish pounds on the lease per year.  Arthur Guinness negotiated the deal in 1759 for the land.  The area had a good water supply and other smaller breweries had also made the area home.  At some point the Guinness Brewery expanded past the original four acre lot and bought out the property.  This made the lease not valid in today’s times.

No one really knows how 9,000 years for the the lease term was decided, or why Mark Rainsford, who had the lease before Guinness, agreed to 45 pounds with no increases for inflation.  It probably wouldn’t have mattered to Guinness, because by 1886, it was the largest brewery in the world, pumping out 1.2 million barrels of beer a year.  Source Who didn’t love those castaways on a fateful trip, but unfortunately they never really left sunny Southern California.  On TV’s “Gilligan’s Island”, the “island” was actually created in Hollywood in the middle of an artificial lake at CBS Studios.  The set cost $75,000 to construct and consisted of artificial palm trees mixed in with real flowers and other plants.  Pipes were laid to control the waterfall that was seen on the show.  Things didn’t quite go as planned at first after filling up the fake lagoon.  The black-topped bottom leaked and had to be repaired before it was finally filled again.  When shots had to be done offsite, the show used Coconut Island in Kanehoe Bay in Hawaii.  Source, Source In 1964, an abandoned lifeboat was found on Bouvet Island located in the South Atlantic Ocean, one of the world’s most remote islands. How it go there and where it came from is still unknown.  Bouvet Island is almost entirely covered in ice and Antarctica is the closest land.

The lifeboat was found by Lieutenant Commander Allan Crawford of the Royal Navy when he was sent to the island to see if it was a proper place for a weather station.  He landed with a team on the island by helicopter in 1964 and discovered the lifeboat in a lagoon that appeared to have come from a larger ship.  The lifeboat had no markings, but he did find the oars that went with it along with a copper tank and a barrel.  There were no signs that anyone had stayed on the island, or worse, died there.

When another expedition team went to the island two years later, the lifeboat was gone.  There are many theories but no explanations on how the lifeboat got on the island in the first place.  Did someone actually get stranded there?  Did traces of the persons there get wiped away by the weather?  No one yet has been able to come up with a good answer.  Source, Source 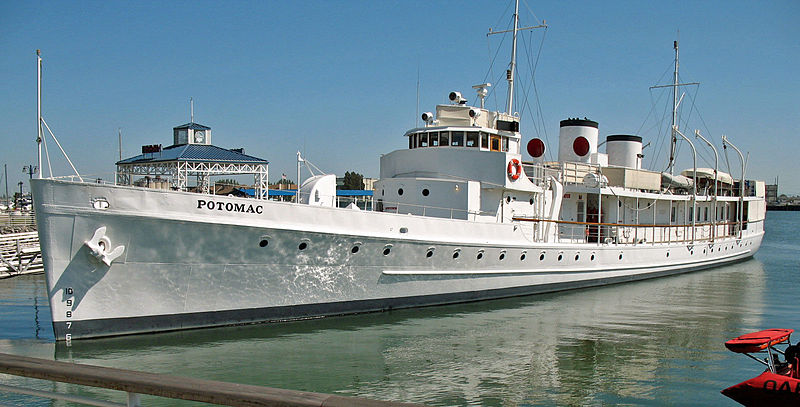 The Potomac started as the Electra which was part of a class of U.S. Coast Guard Cutters.  It was built in 1934 and was designed for coastal patrols.  The presidential yacht at the time was the Sequoia which was a 100 foot yacht and had a cabin with a wood finish.  Because the Sequoia was considered fancy by President Roosevelt, especially during the time of the Great Depression, and because he had to be carried from deck to deck due to his medical condition, a new boat was requested.  The Navy took charge of finding a replacement and chose the Electra.  They converted it to the Potomac in 1936.

President Roosevelt used it throughout his presidency and during World War II.  It traveled up and down the eastern seaboard and was used to entertain foreign dignitaries. It also was used for one of the fireside chats Roosevelt was famous for.  After the death of President Roosevelt, President Truman transferred the yacht to the State of Maryland where it was used as a research vessel studying the fisheries and later as the governor’s yacht.  After that time the yacht was held by private individuals, eventually winding up in the West Indies in 1962.

The Potomac was later transported to Long Beach, California where two businessmen made it into a tourist attraction.  In 1964, it was bought at an auction for $55,000 by Elvis Presley’s manager, Colonel Tom Parker, on behalf of Presley.  Elvis donated the ship a few weeks after he bought it to Danny Thomas as a fundraiser for St. Jude’s Hospital.

St. Jude’s eventually sold the yacht, and it began another colorful portion of its history.  It was seized in San Francisco, along with another ship, as part of a marijuana smuggling ring in 1980.  It was later moored at Treasure Island in San Francisco but sunk after being pierced by a floating piling.  The Navy Reserve raised it, put it up for auction in 1981, and it was bought by the Port of Oakland for $15,000.  The ship is now owned by the Potomac Association and is an FDR museum, the goal that Presley originally had intended when he had donated it.  It can be visited in Jack London Square in Oakland, California.  Source, Source

Another edition is all done.  Impress and annoy those around you with your new, random knowledge.