The weekly collection of completely useless facts. This week’s edition: Space Food, Blue Eggs, Canadian Bacon, Cap’n Crunch, and TV Dinners.  Go behind the scenes on the facts behind the facts.

The first food eaten in space was applesauce from an aluminum tube by John Glenn during the Friendship 7 mission in 1962. It was unknown whether astronauts could eat, swallow, or digest food in zero gravity. Glenn ate xylose sugar tablets with water and applesauce packed in a tube, demonstrating that humans could indeed eat in space without problems. The applesauce was sucked out of the aluminum tube by a straw and was based on Army survival rations. Glenn also had a package of pureed beef and vegetables to eat in the weightless environment—yum! None of it was deemed to be very tasty.

The Araucana chicken of Chile lays blue eggs. The egg color is believed to occur due to a DNA retrovirus that happened at some time during the chicken’s domestication. They are not any healthier, or unhealthier, than regular eggs. One advantage is the egg is already blue, making eggs for Easter a snap. Just make sure to cook it first.

Canadian bacon comes from the lean loin of a pig’s back while American bacon is cut from the pork belly. With that little fact known, why is it called Canadian bacon? The origin probably came from a time in the mid 1800s when there was a shortage of pork in the United Kingdom. To make up for the shortfall, pork was imported from Canada. The British used this lean loin of the pig’s back to make what the Canadians called peameal, since it would be rolled in ground split peas after it was cured in a special brine. The English smoked it and referred to the food as Canadian bacon. Eventually it was brought to the U.S. and the rest as they say is history. So what if you ordered Canadian bacon in Canada? You would probably get served the peameal style of bacon. You’ve been warned. 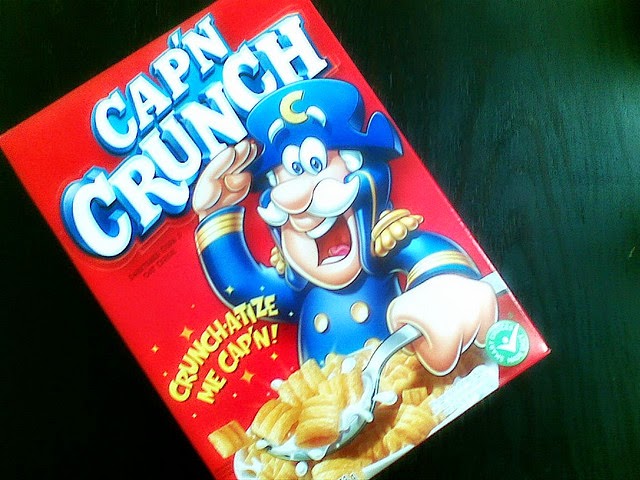 A fact everyone wanted to know. What is Cap’n Crunch’s full name? It’s Cap’n Horatio Magellan Crunch and he lives on Crunch Island in a sea of milk. There is a mountain on Crunch Island called Mt. Crushmore made out of cereal along with talking trees and crazy creatures. In 2013, someone had the time to determine that Cap’n Crunch’s uniform indicated he was a commander and not a captain. Cap’n Crunch was an impostor impersonating a captain. But who could fault the good Cap’n whose slogan was, “It’s got corn for crunch, oats for punch, and it stays crunchy, even in milk.” We’ll let this little gaffe slide. T.V. dinners weren’t invented because of the television. They were invented to use up an overstock of turkey left over from Thanksgiving in 1953. Swanson and Sons, the frozen foods company, had a big problem. They overestimated how many frozen turkeys would be used for Thanksgiving in 1953 and were left with 520,000 pounds of the bird. A traveling salesman for the company had an idea. He came up with a three-compartment aluminum tray design borrowed from the airline industry. The company went with the design and filled the trays with turkey and all the trimmings. They even made the box look like a television with knobs. It was a natural fit for the T.V. dinner to be eaten in front of the T.V. since it kept food segmented and tidy and was easily prepared. It was a tremendous success, and the rest is T.V. dinner history.

Thanks for reading this week’s edition.  Check back again for more facts to annoy your friends.