The fourth issue of the Odd Stew: Oddities plus other bizarre, strange, and fascinating things that have happened in the news over the past week that you may have missed.

The Swiss aren’t usually known for invading other countries, but this week they had a small conflict with the French.  Swiss army helicopters startled French people who were out for a day of relaxation on Rousses Lake in the Jura mountains near the border between France and Switzerland.  The helicopters weren’t there doing military maneuvers, they were giving cows on their side of the border a much needed drink.  The officials at Les Rousses had no idea the operation was taking place and said the Swiss didn’t have authorization to scoop up water from the lake to give to their thirsty cows.  The Swiss disagreed, and said they had gotten permission for the water scooping activity from the French Air Force, not the local authorities, and that a communication mix up was responsible for the confusion.  The Swiss subsequently stopped the operation and insisted they were not stealing water to save their own cows.

What was the reason for the water retrieval activity?  Temperatures in the region have been at record highs, and dairy cows make less milk when they haven’t gotten enough water.  This is a primary concern in this area where since many prized cheeses are produced.  The Swiss army has been pumping water from their own lakes in a government funded operation to give the cows a drink, but it still isn’t quite clear why they decided, permission or not, to take water from the French lake.

This is One Giant That Needs to Go Back to Sleep

A black hole woke up and burst forth with a barrage of x-rays after a 26-year break recently.  It was reported this week that observatories noticed the burst on June 15th, and it’s still going today.  Scientists aren’t exactly sure why, but they think it may have been caused by some type of material falling into the black hole.

Winter in Hawaii in the Summer?

Snowfall in Hawaii in summer?  Yes, you read that correctly.  Snow fell on the ground in Hawaii in the middle of July.  1.5 inches of snow was recorded on Hawaii’s highest peak, Mauna Kea, which is at 13,796 feet.  This isn’t as an uncommon occurrence as you might think.  In January of 2015, blizzard warnings were made for Mauna Kea and Mauna Loa, and another weather system dumped snow there in March, but this is the middle of summer.  Snowfall for this area on a island in the middle of the Pacific, although rare, has happened before during the summer.  Average high temperatures for this time of year are around 40 degrees Fahrenheit, while the average lows get to around 25 degrees Fahrenheit at these heights.  A passing thunderstorm was blamed for the temporary tropical wonderland.

Don’t Mess With the ‘Dillo 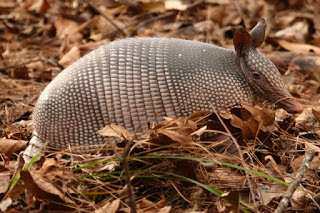 A man in Linden, Texas found out the hard way that nature makes the best defenses.  At 3 a.m. on July 30th, the man shot at an armadillo and the bullet ricocheted off the animal and struck the man in the head.  He managed to live to tell his tale.  A similar incident occurred in Georgia in April where a man shot at an armadillo with a 9 mm handgun.  The bullet ricocheted off the armadillo and wounded the man’s mother-in-law.  While the armadillo in this incident was killed by the bullet, the armadillo in Texas is still at-large.  Armadillos are good at digging as they look for food at night and are notorious for tearing up lawns and grass, but maybe people should think twice before taking on this well fortified animal.

A Norwegian golf course is having an unusual problem.  It seems someone continues to feel that the golf course makes a good bathroom.  The groundskeeper at the Stavanger Golf Club in Hafrsfjord, Norway has been finding human poop and toilet paper in various holes of the course since 2005.  The groundskeeper, named Kenneth Tennfjord, has been trying to solve the mystery since it began and has narrowed the hunt to a man (because the poo is too large to be a woman’s), and the pooper only does it on weekdays.  Tennfjord has even determined that the pooper has a few favorite holes in which he likes to do his business.  The club installed spotlights, but the pooper disabled them, and they discovered he was using a bike for transportation.  Club officials think the unknown man may have some type of mental problem, or he just really hates the game of golf.  That last reason might not be that far of a stretch.

When Getting Out of Bed May Lead to a Brain Injury

A British inventor has found a way to make sure someone never has trouble with their alarm in the morning again.  Colin Furze has come up with the “High Voltage Ejector Bed” which shots the sleeper out of their bed.  Furze posted his amazing device in action to YouTube.  It shows him being slung out of the bed rather forcefully.  He was asked by the makers of Taylors High Voltage Coffee to make the bed, and he attributed his inspiration for the bed to Wallace and Gromit, from the clay-mation movies.  Gromit usually pushes a button that flings Wallace out of his bed and into his awaiting clothes.  One thing is for certain, no one would have trouble going back to sleep after this; if they can live through it.

These Guys May Lose Their Jobs

In Mahwah, New Jersey last week, workers refilling ATMs did a really bad job.  They left $141,000 sitting on a lawn where they had been refilling an ATM and left the site before one of the workers realized he didn’t have the bag with the cash.  The employees of ATMForUs.com were seven miles away before realizing their gaffe.  By that time, someone else had already made off with the cash.  A surveillance video showed a white work van pass by the unattended bag and then return.  A passenger in the van got out and took the bag that had $10 and $20 bills in it.  Mahwah police have been unable to find the man as of yet, but they did spot the white van in another surveillance video from an automotive repair business.  The passengers there took tires from a fenced area.  I guess $141,000 just wasn’t enough.