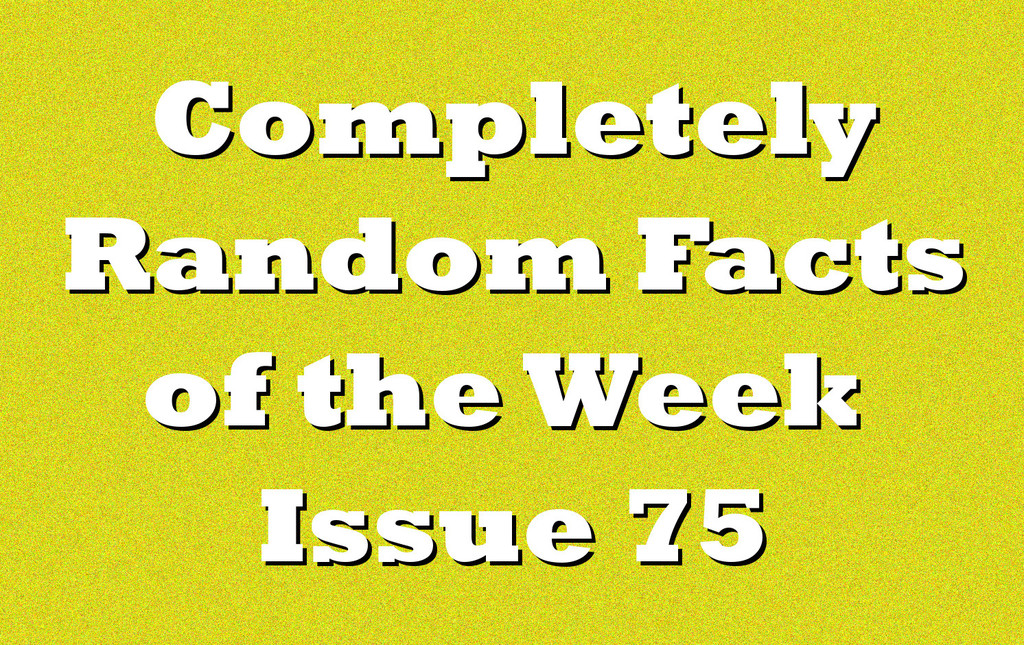 In this week’s random facts edition: Salvador Dali’s Candy Logo, Michael Bublé Gets Canned for Stealing a Hot Dog, The Cost of Getting Married, Sony’s First Product that Flopped, and The Building with a Highway Running Through It. The Chupa Chups Lollipop logo was designed by artist Salvador Dali (just think melting clocks and signature mustache). Dali designed the logo in 1969 for the Spanish company Chupa Chups whose name comes from the Spanish word chupar which means “to suck”.

The founder of the company, Enric Bernat, was a friend of the artist. While meeting for coffee one day, Bernat told Dali that he wanted him to rebrand his lollipop. Dali took on the job and had the logo placed on the top of the lollipop instead of on the side so it could always be seen intact and in full form. He reportedly spent only an hour creating it. Source, Source Michael Bublé Gets Fired for Stealing a Hot Dog

Singer Michael Bublé has won four Grammy awards and has sold more than 55 million albums worldwide, but it may have never happened if he hadn’t been fired for something rather mundane when he was just starting his acting career.

In 1996, Bublé got a part as an extra on the TV show, The X-Files, playing a submarine crew member in a two part episode. He was just starting out in Hollywood and pursing a career in acting instead of singing. But Bublé made a gaffe that should have been rather harmless. He took a hot dog from the craft services table because he was hungry. A crew member working on the show told him he would never work in Hollywood again and would be blacklisted. He got fired for “stealing” the hot dog, but it didn’t hurt his eventual career as a singer. He went on to appear in a documentary soon after the incident and then had a regular singing gig on The Vicki Gabereau Show, a Canadian afternoon talk show. His singing career took off in the beginning 2000s. Source The Cost of Getting Married

Getting married is turning out to be an even more expensive affair with each passing year. The Knot, a wedding planning website, has conducted a survey since 2006 that tracks the average cost of a wedding in the United States. In 2o16, the cost hit its all-time high. The average cost to get hitched for 2016 was $35,329. In 2015 it was $32,641. The Knot 2016 Real Weddings Study surveyed 13,000 brides and grooms to get the numbers.

What they found was that couples were making their weddings more personalized affairs and spending more per guest than ever before. The average number of guests actually decreased from 149 in 2009 to 141 in 2016, but the cost per guest had increased. A lot of the cost also depended on where the couple was having the wedding. Manhattan came out on top with an average cost of $78,464 while the lowest was in Arkansas at $19,522. The average number of bridesmaids and groomsmen was 5, and the most popular months to get married were September and October. The average cost of these weddings didn’t include the honeymoon. Source Sony is a multinational conglomerate based in Tokyo, Japan that has businesses in electronics, games, music, movies, and finance. They are known for the success of their Walkman and Playstation product lines, but the first product Sony ever put out was a huge failure.

It all began in 1946 after World War II in an electronics shop in a department store in Tokyo owned by Masaru Ibuka. He began by repairing radios in his own small factory and found success fulfilling this post-war need. Akio Morita, a friend of Ibuka,  soon joined him, and they called their new company Tokyo Tsushin Kogyo, also known as the Tokyo Telecommunications Engineering Corporation .

There was a serious food shortage in the country at the time, and the company began to develop a product that could be used by people in their daily lives. It was an electric rice cooker. The cooker was a wooden tub that had aluminum electrodes at the bottom. The problem was the rice cooker didn’t cook rice very well. It either under-cooked or over-cooked the rice and was dependent on the type of rice used and the weight of the water. It was a huge flop.

Even though the pair failed with their first real product, it didn’t slow them down. They later succeeded with a vacuum-tube voltmeter that was sold to the government. The new company next came up with an even more successful product, an electrically heated cushion. The company grew more with the production of magnetic tape and tape recorders, and they began to produce radios. This resulted in the men changing the original name of their company. They wanted a name that would be easy to pronounce in any language, was short, and easy to remember. They eventually came up with Sony and changed the name in 1958. Sony came from the Latin word “sonus” which meant sonic or sound, and the English phrase “sonny boys”, which at the time stood for smart and energetic young men. Source, Source

The Building with a Highway Running Through It

The property owners originally wanted to redevelop the land when approval for such a thing had been granted by the government in 1983. The problem was the government refused to issue building permits because a highway had already been planned to run through the area. The owners of the land negotiated with the Hanshin Expressway corporation for five years until they came up with the solution to run the highway directly through the building. It was eventually completed in 1992. The highway doesn’t touch the building in any way, but the highway department still has to pay rent on the floors it occupies. Source, Source