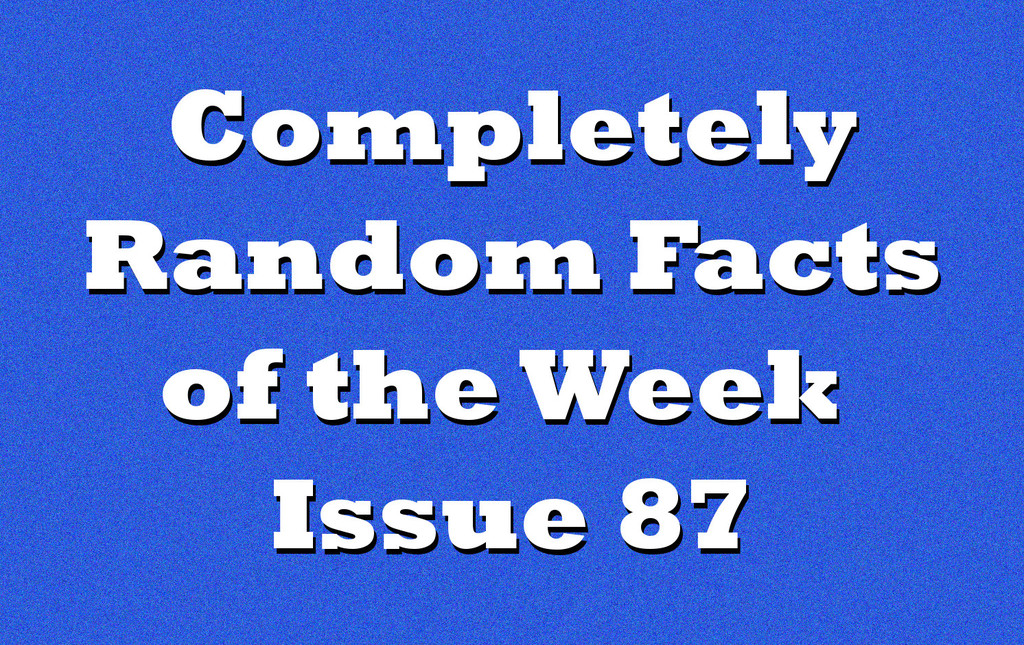 In this week’s facts edition: A Sea Organ, The Unknown Artist Who Was a Janitor, Elizabeth Taylor’s Eyelashes, An Incentive to Repair, and Homeless in Hawaii.

The city of Zadar in Croatia is located on the Dalmatian coast of the Adriatic Sea and is known for its beautiful architecture, ancient monuments, and rich cultural heritage, but the seaside city also has an interesting coastal attraction. It’s called the Sea Organ, and it plays music using only the movement of the Adriatic Sea.

The Sea Organ is a series of large steps that lead down to the sea in the western end of the Riva, or the city’s waterfront area. Hidden under the lower steps are channels that allow the water and air to flow under the steps. These channels are connected to 35 different pipes that vary in angle, length, and diameter. As the air is pushed through these pipes by the sea, it produces a sound that comes out from under the upper steps. The Sea Organ can play seven chords of five different tones, and because the sea never hits the steps in the same way, the organ always sounds different.

The organ was the brainchild of architect Nikola Bašić and was constructed in 2005 after the city had built a new jetty for cruise ships. It won the European Prize for Urban Public Space in 2006 and beat out 207 other projects from across Europe.  Source, Source

The Unknown Artist Who Was a Janitor

Henry Darger worked for most of his life as a janitor and dishwasher at three different Chicago hospitals. He was frequently spotted picking through garbage which he would take into his apartment. He was also known for attending a Catholic Mass four to five times a day and largely kept to himself. Near the end of his life, Darger was moved into a nursing home, and the landlord of his one-bedroom Chicago apartment went to clean out the man’s home shortly before he died in 1973. He was shocked at what he found.

Within the mass of things Darger had collected over the years were two trunks, and in them were Darger’s life works. One work was an eight volume, 5,000-page written piece titled The History of My Life along with a number of diaries that detailed his everyday events and his prolific Mass attendance. There was also a weather journal that covered a span of 10 years from December 31, 1957, to December 31, 1967.

The biggest surprise to come out of the trunks, however, was Darger’s 15,145-page typewritten manuscript called The Story of the Vivian Girls, in What is Known as the Realms of the Unreal of the Glandeco-Angelinnian War Storm, Caused by the Child Slave Rebellion, or what has been come to be known as In the Realms of the Unreal. The fantasy epic was 13 volumes long and had three additional volumes that contained 300 watercolor and collage paintings that illustrated the story. This art is what the reclusive man became best known for.

The unsettling story of In the Realms of the Unreal was about a fantasy world that had been destroyed by war. The heroes of the story were children, particularly young girls, and the villains were usually adults.  Darger even wrote a handwritten 10,000-page sequel to his fantasy epic titled Crazy House: Further Adventures in Chicago.

Darger’s landlords, Nathan and Kiyoko Lerner, took charge of Darger’s estate after his death since the man had no family. Nathan Lerner had been a prominent Chicago photographer and began to work publicizing Darger’s art. Darger is considered one of the most significant self-taught artists of the 20th Century, and the American Folk Art Museum currently holds the largest repository of his works. Darger’s art can reportedly fetch upwards of $750,000.  Source, Source, Source Actress Elizabeth Taylor was known for her movies and love life, but she was also known for her violet eyes. She had some help in highlighting those eyes, however, through a rare disorder that gave her an extra row of eyelashes.

Taylor’s second row of eyelashes was thought to be from a genetic mutation of the FOXC2 gene and was discovered when she was young. The disorder is known as distichiasis. The rare disorder results in abnormal growth of eyelashes on the outside edge of the eyelid. Distichiasis can cause problems such as eye irritation, reduced vision, or the breakdown of surface cells in the eye. There is also a more common condition known as trichiasis where the eyelash grows toward the eye rather than away from it. It’s unknown if Taylor had any problems due to the condition, but if it had, it didn’t show.  Source, Source An Incentive to Repair

On January 1, 2017, a new tax rule went into effect in Sweden that is designed to make people think twice about throwing items away as opposed to getting them repaired. The value added tax rate (VAT) was reduced in half for repair costs for shoes, clothes, and bicycles. People can also claim half of the labor costs on their income tax returns for repairs to larger items such as refrigerators, washing machines, and ovens.

It’s hoped by the government that the new tax incentives will reduce items thrown in a landfill and will create jobs in the repair and service industry. While the tax break from the smaller items might be too insignificant for the average Swede, citizens of the country may think twice before buying a bigger ticket item knowing that the cost of repairing the item could cost them half as much than before the tax incentive went into effect.  Source, Source Hawaii has a program that attempts to combat homelessness in the state by flying homeless people back to the mainland. The program started in 2014 and uses private funds because for four consecutive years the Hawaii state legislature rejected a proposed state funded program that was called “Return-To-Home.”

The goal of the privately funded program is to reduce homelessness in Hawaii and is run by the non-profit Institute for Human Services and the Waikiki tourism industry. Between October 2014 and November 2015, the program flew 133 homeless people back to the mainland at a cost of $20,374. Since the program began, 364 homeless people in Hawaii received some sort of assistance to return to the mainland.

Homeless people must pay half the airfare and have a support structure in place on the U.S. mainland to qualify for the program. Hawaii’s Department of Human Services opposed the idea and wanted the focus to be on other state initiatives like the state’s Housing First program which places the homeless in rental units instead.  Source, Source

That’s it for another edition of the Random Facts of the Week. Check out more facts here.